This is the first of five parts in The Gygax '75 Challenge in which I'll be creating a Delving Deeper campaign setting using the process set forth by Dungeon & Dragons co-creator Gary Gygax. Gary first presented this process in the April 1975 issue of Europa fanzine.

Creating a setting from scratch can seem like a daunting task, but it doesn't need to be. Gary breaks the process down into 5 easy steps. In fact, he is so confident in his methods that he promises that by following these steps you'll be "stuck refereeing [Dungeons & Dragons] seven days per week until the wee hours of the morning!" Sounds like fun. Let's jump in!

One minor change to his process is that I'll be using Delving Deeper instead of any of the editions of venerable D&D. I've come to Delving Deeper recently as a result of Ray Otus' blog and podcast (check out links at the end of this post for the results of his efforts in this challenge). For those that don't know what DD is:


Delving Deeper is a legal emulation of the original 1974 fantasy role-playing game published under the Open Game License.

My study of the game leads me to believe it is an authentic and well-researched rendition of OD&D. You can learn more about DD at immersiveink.com. With the game system selected, it's time to get back to Gary's process.

Gary tells us that creating the overall setting "is something you do in your head." From this I take it he means daydreaming and cogitating on the things that you'd like in a fantasy setting.

Having spent the better part of a week thinking about the setting I want to referee, I can say the richness of the setting has benefited from this thought exercise. Ideas started simply and grew as I spent more time in that setting "head-space". For example, when it came to what fantasy races to include, I worked from the general - Elves - to the more specific - the eternal and reclusive Eldir - especially once I found some visual inspiration to fuel the fire of the creative process.

Next Gary suggests that "fantasy/swords & sorcery games need not have any fixed basis for the assumptions made by its referee (my own doesn't) except those which embrace the whole of fantasy." Basically, anything goes. Mix and match sources (see below) to your heart's desire. I feel his recommendation is sound. A modern example of this is the approach taken by the Dungeon Crawl Classics RPG.

Personally, this sort of approached can easily lead to a more gonzo game; once in a while this is great, but not exactly something I like to run on a regular basis. I tend to keep the scope narrow, approaching the mixing of sources as a very selective process. It helps that my source material already has a slight mixing of genres. Gary does admit that settings "based upon limits...can be very interesting in themselves providing the scope of the setting will allow players relative free-reign to their imaginations." To which I wholeheartedly agree!

Gary's next bit of advise is rather interesting. He encourages referees to "keep it secret from your players, or else they can study your sources and become immediately too knowledgeable, thus removing the charm of uncertainty." I get where he's coming from. I once had a player who memorized both AD&D Monster Manuals and the Fiend Folio. I was hard-pressed to provide any element of surprise without going to a source that he had no knowledge of.

But that example is one dealing with core game mechanics. When it comes to the flavor of the source material, I think the more the player knows, the better they can get into the setting. If they know the setting is Medieval European Folklore then they can make appropriate choices within the game to supplement play. In fact, they may be able to offer suggestions and additions that compliment the setting the more familiar they are with the source.

Now to get down to it. While Gary lists many excellent potential sources, I chose a source that has given me great joy for many years: the Canadian rock band Rush. I've been a fan of their music for almost their entire career. Their music is filled with stories of adventure and fantasy.

In a fortunate moment of synchronicity I realized that two of Rush's albums not only map so well to the medieval European backdrop of Delving Deeper, but were also released in 1975 - the year Gary's article on campaign building appeared in EUROPA : Fly By Night and Caress of Steel. From these albums I chose a number of songs that are exemplary of the themes and characters of the setting I am building (see links below for the Spotify playlist):

From these songs I compiled the following high-level summaries for my setting.

The Gygax 75 Challenge: Week 1
Uzerak: Where Gods Walk Mood Board

This work is licensed under a Creative Commons Attribution-NonCommercial-ShareAlike 4.0 International License.
at October 09, 2019 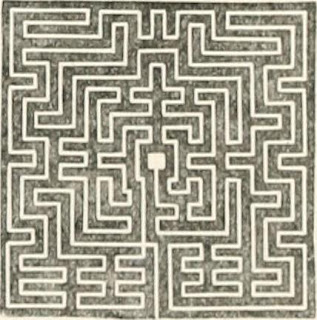